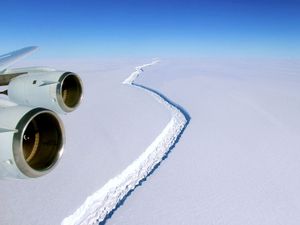 Antarctica, Earth’s coldest continent, is known for its remoteness, its unique fauna, and its frigid surface of ice. Around Antarctica’s periphery, dozens of ice shelves (that is, masses of glacier-fed floating ice that are attached to land) project outward into the Southern Ocean. The two largest ice shelves, the Ross Ice Shelfand the Ronne Ice Shelf, span a combined area of nearly 350,000 square km (about 135,000 square miles)—an area roughly equivalent to Venezuela—but Antarctica’s Larsen Ice Shelf, the continent’s fourth largest, has received the bulk of the attention over the last 25 years because it is slowly coming apart. The latest episode in this saga occurred between July 10 and July 12, 2017, when a one-trillion-metric-ton chunk of ice—possibly critical to holding back a large section of the remaining shelf—calved (that is, broke away).

The Larsen Ice Shelf is located on the eastern side of the Antarctic Peninsula and juts out into the Weddell Sea. It originally covered an area of 86,000 square km (33,000 square miles), but its footprint has declined dramatically, possibly as a result of warming air temperatures over the Antarctic Peninsula during the second half of the 20th century. In January 1995 the northern portion (known as Larsen A) disintegrated, and a giant iceberg calved from the middle section (Larsen B). Larsen B steadily retreated until February–March 2002, when it too collapsed and disintegrated. The southern portion (Larsen C) made up two-thirds of the ice shelf’s original extent, covering an area of about 50,000 square km (19,300 square miles) alone. Its thickness ranges from 200 to 600 meters (about 660 to 1,970 feet). Sometime between July 10 and July 12, 2017, a 5,800-square-km- (~2,240-square-mile-) section—some 12% of the Larsen C—broke away. Signs of Larsen C’s impending fracture date back to 2012, when satellite monitoring detected a steadily growing crack near the Joerg Peninsula at the southern end of the shelf. NASA and ESA satellites tracked the rift as it grew to more than 200 km (124 miles) in length and the huge iceberg separated from the continent.

Although some 88% of Larsen C remains, many scientists worry that it will fall apart like Larsen A and Larsen B, because the loss of such a huge area of the shelf’s ice front may make the remainder of the ice shelf less stable. The shelf’s mass, along with the fact that it is pinned behind shallow undersea outcrops of rock below, creates a natural dam that significantly slows the flow of the ice into the Weddell Sea. Scientists note that the section that calved was not held back by rock, so they are less worried that the loss of the calved section will result in the shelf’s wholesale disintegration in the near term. Some scientists even concede that the calved area could regrow to form a new ice dam that reinforces the shelf. However, the results of ice-calving and glacier-flow models predict that the shelf will continue to break apart over the course of years and decades.

Calving is a natural process driven, in part, by seasonal changes in temperature and the pressures associated with the build-up of compressional stress on the ice. Some studies argue that spring and summer foehns (warm dry gusty winds that periodically descend the leeward slopes of mountain ranges) have also contributed to the weakening of the ice. As investigations into ice shelf dynamics continue, such large iceberg calving events are often regarded as symptoms of climate changeassociated with global warming. While global warming may turn out to play a part in ice shelf calving events, scientists disagree on the role, if any, the phenomenon has played in recent developments on Larsen C.