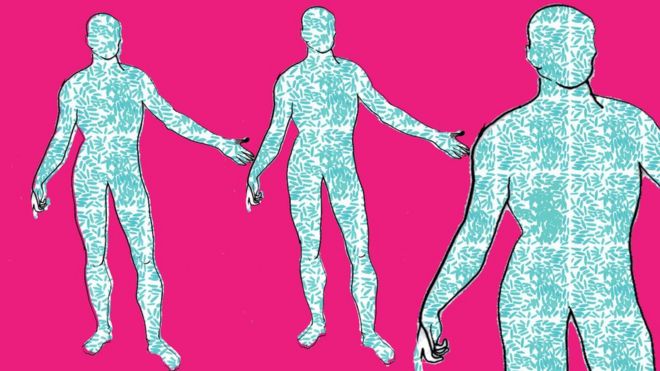 More than half of your body is not human, say scientists.

Human cells make up only 43% of the body’s total cell count. The rest are microscopic colonists.

Understanding this hidden half of ourselves – our microbiome – is rapidly transforming understanding of diseases from allergy to Parkinson’s.

The field is even asking questions of what it means to be “human” and is leading to new innovative treatments as a result.

“They are essential to your health,” says Prof Ruth Ley, the director of the department of microbiome science at the Max Planck Institute, “your body isn’t just you”.

No matter how well you wash, nearly every nook and cranny of your body is covered in microscopic creatures.

This includes bacteria, viruses, fungi and archaea (organisms originally misclassified as bacteria). The greatest concentration of this microscopic life is in the dark murky depths of our oxygen-deprived bowels.

Prof Rob Knight, from University of California San Diego, told the BBC: “You’re more microbe than you are human.”

Originally it was thought our cells were outnumbered 10 to one.

“That’s been refined much closer to one-to-one, so the current estimate is you’re about 43% human if you’re counting up all the cells,” he says.

But genetically we’re even more outgunned.

The human genome – the full set of genetic instructions for a human being – is made up of 20,000 instructions called genes.

But add all the genes in our microbiome together and the figure comes out between two and 20 million microbial genes.

Prof Sarkis Mazmanian, a microbiologist from Caltech, argues: “We don’t have just one genome, the genes of our microbiome present essentially a second genome which augment the activity of our own.

“What makes us human is, in my opinion, the combination of our own DNA, plus the DNA of our gut microbes.”

It would be naive to think we carry around so much microbial material without it interacting or having any effect on our bodies at all.

Science is rapidly uncovering the role the microbiome plays in digestion, regulating the immune system, protecting against disease and manufacturing vital vitamins.

It is a new way of thinking about the microbial world. To date, our relationship with microbes has largely been one of warfare.

Antibiotics and vaccines have been the weapons unleashed against the likes of smallpox, Mycobacterium tuberculosis or MRSA.

That’s been a good thing and has saved large numbers of lives.

But some researchers are concerned that our assault on the bad guys has done untold damage to our “good bacteria”.

Prof Ley told me: “We have over the past 50 years done a terrific job of eliminating infectious disease.

“But we have seen an enormous and terrifying increase in autoimmune disease and in allergy.

“Where work on the microbiome comes in is seeing how changes in the microbiome, that happened as a result of the success we’ve had fighting pathogens, have now contributed to a whole new set of diseases that we have to deal with.”

The microbiome is also being linked to diseases including inflammatory bowel disease, Parkinson’s, whether cancer drugs work and even depression and autism.

Obesity is another example. Family history and lifestyle choices clearly play a role, but what about your gut microbes?

A diet of burgers and chocolate will affect both your risk of obesity and the type of microbes that grow in your digestive tract.

So how do you know if it is a bad mix of bacteria metabolising your food in such a way, that contributes to obesity?

Prof Knight has performed experiments on mice that were born in the most sanitised world imaginable.

Their entire existence is completely free of microbes.

He says: “We were able to show that if you take lean and obese humans and take their faeces and transplant the bacteria into mice you can make the mouse thinner or fatter depending on whose microbiome it got.”

“This is pretty amazing right, but the question now is will this be translatable to humans”

This is the big hope for the field, that microbes could be a new form of medicine. It is known as using “bugs as drugs”.

I met Dr Trevor Lawley at the Wellcome Trust Sanger Institute, where he is trying to grow the whole microbiome from healthy patients and those who are ill.

“In a diseased state there could be bugs missing, for example, the concept is to reintroduce those.”

And he added: “I think for a lot of diseases we study it’s going to be defined mixtures of bugs, maybe 10 or 15 that are going into a patient.”

Microbial medicine is in its early stages, but some researchers think that monitoring our microbiome will soon become a daily event that provides a brown goldmine of information about our health.

Prof Knight said: “It’s incredible to think each teaspoon of your stool contains more data in the DNA of those microbes than it would take literally a tonne of DVDs to store.

“At the moment every time you’re taking one of those data dumps as it were, you’re just flushing that information away.

“Part of our vision is, in the not too distant future, where as soon as you flush it’ll do some kind of instant read-out and tells you are you going in a good direction or a bad direction.

“That I think is going to be really transformative.”